Share the world of wine on your favorite social network 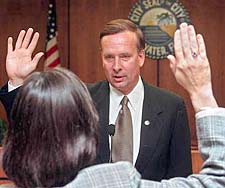 Brian J. Aungst, Sr. served as the mayor of one of Florida’s largest cities, Clearwater, for two terms from 1999-2005. Term limits kept him from seeking a third term. He was credited with turning a stagnant city around, serving as the catalyst to attract unprecedented economic development to a once dormant community.

During his six-year tenure, he attracted nearly $750 million of economic development to Clearwater including a sweeping redevelopment of the city’s number-one economic engine, Clearwater Beach.

Mayor Aungst served on Pinellas County’s Tourist Development Council, the advisory board of Pinellas County’s Convention and Visitors Bureau, using his position as mayor to encourage tourists to visit the area, especially after the events of 9/11/2001.

Aungst was instrumental in putting together a public-private partnership to build a new Community Sports Complex Bright House Networks Field to host Philadelphia Phillies Spring Training Baseball and their minor league team the Clearwater Threshers and other community events. In addition, he spearheaded a public-private partnership to build a new 90,000-square-foot (8,400 m2) signature public library in downtown Clearwater. Under his leadership, the city built multiple community recreation centers and athletic complexes and was named Sports Illustrated magazine’s “Sports Town USA” for the state of Florida. He was the first Mayor of Clearwater, Florida to be re-elected unopposed since 1956. Aungst supported his successor Mayor Frank Hibbard who was elected unopposed to replace him in 2005 and re-elected in 2008. 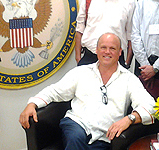 Eric V. Kennedy (born December 21, 1965) is an American publisher and media entrepreneur who has launched multiple internationally distributed magazine titles and websites. He began his career in 1985, at the age of 19 when he joined the launch of the international consumer publications known as the duPont REGISTRY. These publications catered to the interests of Fortune 500 executives, Hollywood actors and entertainers, professional athletes, and the rich and famous from over 50 different countries for more than three decades. Eric headed the launch of the duPont REGISTRY’s Buyers Gallery of Fine Homes which was named 50 Most Notable Magazine Launches in 1995 by Samir Husni and Hearst Magazine Enterprises[2] out of the nearly 900 magazines launched that year.

Eric served multiple roles at the duPont REGISTRY heading up new magazine launches, the early launch of dupontregistry.com in 1995, and serving on the companies board of directors where he was instrumental in the establishment and management of partnerships with notable entrepreneurs Hugh M. Hefner of Playboy Enterprises and H. Wayne Huizenga, founder of Blockbuster Video and owner of the Miami Dolphins.

A significant number of these magazine covers have been featured on movies and television sets such as Murder at 1600 starring Wesley Snipes, Alan Alda, and Diane Lane. The automotive title was also regularly featured on the set of Tim Allen’s (American Broadcasting Company) Home Improvement.

Eric then went on to launch Atlantis Magazine in 2006 covering entertainment, travel, environmental, and health topics, and has also featured noteworthy actors on the cover such as Leonardo DiCaprio, Daniel Craig, and Johnny Depp.

In that same year, alongside of Matthew Gough and Jerry Yohananov, Eric launched a series of consumer magazines known as the MOJO Guides in Tampa Bay, Sarasota, and Sydney Australia.